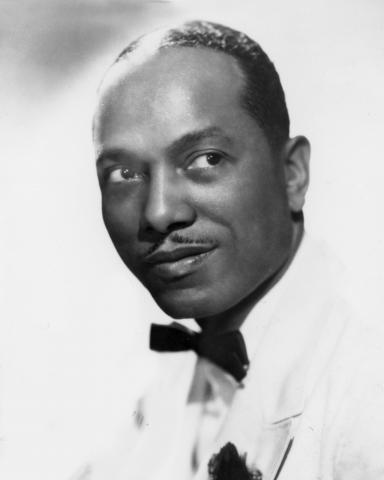 As a prominent big band leader, Andy Kirk popularized the Kansas City sound nationwide. Not a virtuoso musician or charismatic showman like his contemporaries Bennie Moten and Count Basie, the unassuming Kirk excelled at arranging music, organizing musicians, and conducting.

Growing up in Denver, he did not play an instrument until his late teens. He started his career in 1919, performing on alto saxophone and tuba in George Morrison’s band, and by 1925 had moved on to Terrance Holder’s band, the Dark Clouds of Joy. When Holder left four years later, the band members elected Kirk as their new leader. He renamed the group the Twelve Clouds of Joy and moved it to Kansas City, playing regular shows at the Pla-Mor Ballroom and Paseo Hall.

Under his leadership, the Clouds went on to tour the United States through the 1930s and 1940s. “For us,” Kirk wrote, “Kansas City was like the hub of a wheel with spokes that extended in all directions.” He dissolved the band in 1948 and went on to careers in real estate and as an administrator for musicians’ unions in New York.