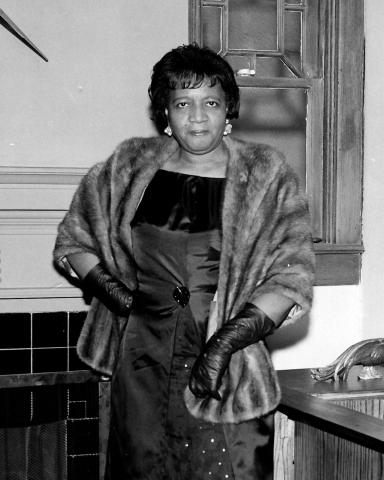 Born in Texas, Cloteele T. Raspberry moved to Kansas City at a young age and became a fashion designer and mentor to young women interested in the profession. Raspberry attended Wendell Phillips Elementary School and graduated in 1927 from Lincoln High, where she stood out in her sewing class. Two decades later earned an associate’s degree from Isabelle Boldin’s School of Fashion Design.

While doing sewing in her home, she taught night classes at the Brooklyn Center and local YWCA. Later a self-employed dress designer, Raspberry joined the National Association of Fashion and Accessory Designers. She traveled nationwide each year to showcase her work at designer shows in cities including San Francisco, Los Angeles, Cleveland, and Chicago.

She was chosen as a NAFAD junior leader, guiding girls and young women ages 14-18 who were members of the national organization. They staged their own annual fashion show, with proceeds going toward their advanced training. Raspberry also was a 25-year member of Kansas City’s Urban League Guild, and served as a Sunday school teacher for more than 35 years at Paseo Baptist Church. She died at age 83 in 1994, leaving her husband William, daughter Villa, and a Kansas City legacy of more than 70 years.