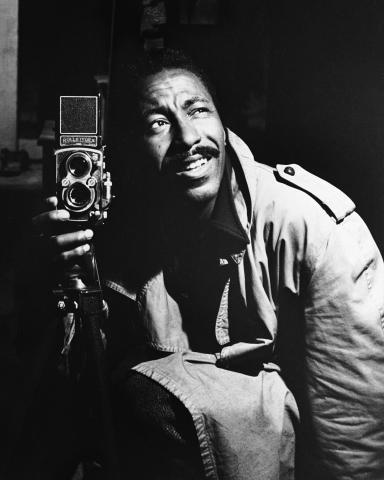 The son of a farmer in Fort Scott, Kansas, Gordon Parks defied racism and his own impoverished beginnings to become one of the world’s great photographers, as well as an internationally recognized writer, composer, and filmmaker.

As a photographer Parks moved easily between fashion, portraiture, and gritty studies of African American life. In the 1940s he shot fashion layouts for Vogue; in 1948 he became the first Black staff member of Life magazine, where for 20 years he shot fashion, sports and entertainment celebrities, and studies of poverty and racial segregation.

In 1969 he adapted his autobiographical novel “The Learning Tree” into a film, becoming Hollywood’s first major Black director. Subsequent films included “Shaft” (1971), “The Super Cops” (1974), and “Leadbelly” (1976). He wrote a three-volume memoir, several books of poetry, and composed jazz tunes, a piano concerto, a symphony, and a ballet about Martin Luther King Jr.

The underlying theme of his work, Parks said, was freedom: “Not allowing anyone to set boundaries, cutting loose the imagination, and then making the new horizons.”