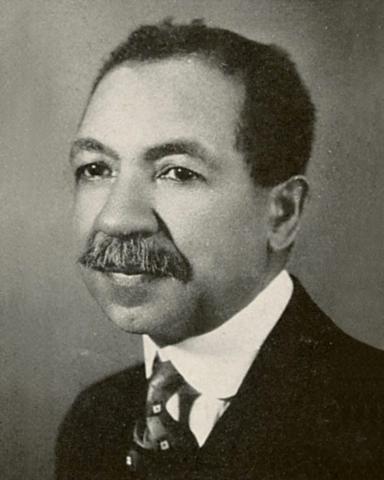 Hugh O. Cook, one of the longest-serving principals of Lincoln High School in Kansas City, Missouri, was born in Washington, D.C., graduated from Cornell University, and taught at Normal A&M College in Huntsville, Alabama. He moved to Kansas City in 1901 to teach mathematics and psychology at Lincoln High and assumed leadership of the school in 1922.

Cook’s tenure saw Lincoln High’s move into its new Woodland Avenue facility, which is now on the National Register of Historic Places. Awarded the Distinguished Service Medal from the Missouri State Association of Negro Teachers in 1940, he also was instrumental in the founding of the Paseo YMCA and the Kansas City branch of the NAACP.

Cook joined the Army YMCA during World War I and was attached to the 371st Infantry Regiment, which provided the “comforts of home” to Black troops. He and his wife had two children and became foster parents to dozens of others without homes of their own. Following Cook’s retirement in 1944, he lived out the remainder of his life with his wife in Los Angeles, California.