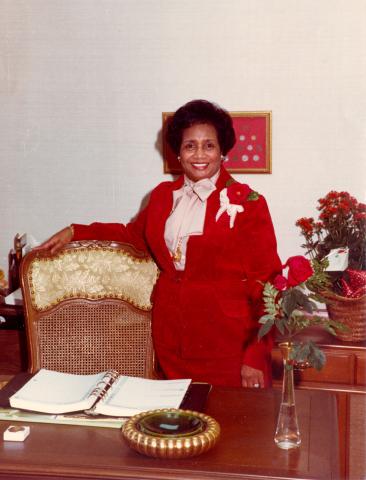 Image: The Museum of Public Relations

The daughter of a house painter and a domestic worker, Inez Kaiser learned the value of hard work at a young age and made herself into a nationally known business leader.

Born in Kansas City, Kansas, Kaiser set her sights on going to college to learn a profession and attended Pittsburgh State University. She returned to Kansas City with a degree in education. While working as a home economics teacher, she discovered a knack for the written word and penned a regular column, Fashion-Wise and Other Wise, that appeared in Black newspapers across the country. The attention helped Kaiser gain the confidence to leave teaching to start her own public relations firm, the first owned by an African America woman in the U.S.

Kaiser met challenges but never backed down. When, as a Black business owner, she was repeatedly denied downtown office space in the early 1960s, she let it be known that her contacts with the major television networks would gladly report on the story. Soon, she was given her office space. Her firm, Inez Kaiser and Associates, landed 7UP as its first big client, then more, and thrived.

As an outspoken advocate for the advancement of Black women in business, Kaiser served as an advisor to the Nixon and Ford presidential administrations, represented the U.S. at the United Nations Conference on the Economic Status of Women, and was named the National Business Advocate of the Year by the Department of Commerce in 1997. Locally, she was the first Black woman to join the Greater Kansas City Chamber of Commerce.

In 1986, Kaiser was awarded an honorary Doctor of Law degree from Lincoln University. When she passed away in 2016, a favorite quote of hers by author Napoleon Hill was recalled by family and friends: “Whatever the mind can conceive and believe, it can achieve.”