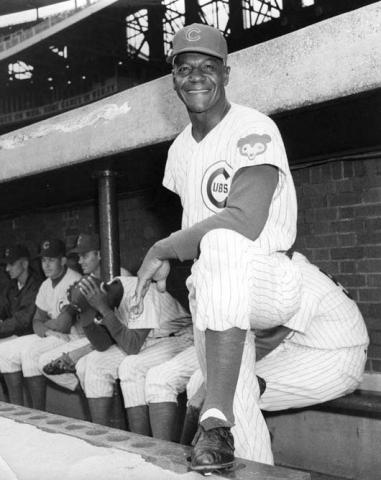 John Jordan O’Neil was born in Carrabelle, Florida. He was the second of three children born to John Sr., a sawmill worker, and Luella, a restaurant manager. The family moved to Sarasota in 1923. It was there that O’Neil received his first taste of professional baseball. As a 12-year-old, O’Neil began his semi-professional career as a member of Florida’s Sarasota Tigers. He took his nickname from Miami Giants semi-pro team co-owner Buck O’Neal.

Because of Jim Crow-era racism, O’Neil was not admitted to the high school in Sarasota. O’Neil was eventually able to obtain his high school diploma and earned a baseball and football scholarship to Edward Waters College in Jacksonville. He completed two years of college before leaving school to play baseball professionally in 1934.

In 1938, after four years of moving from team to team, O’Neil earned a spot as the first baseman for the Kansas City Monarchs, one of the elite teams of the Negro Leagues. From 1939 to 1942, Kansas City won four consecutive Negro American League pennants. O’Neil told Sports Illustrated about the glory years of the Monarchs: “We were like the New York Yankees. We had that winning tradition, and we were proud. We had a strict dress code — coat and tie, no baseball jackets. We stayed in the best hotels in the world. They just happened to be owned by Black people. We ate in the best restaurants in the world. They just happened to be run by Blacks.”

In 1944, with the United States deeply involved in World War II, O’Neil enlisted for a two-year stint with the U.S. Navy. Following the end of the war, O’Neil returned to the Monarchs in 1946. He won the batting title that year and also married Memphis school teacher Ora Lee Owen. In 1948, O’Neil was named player-manager of the Monarchs. He led Kansas City to league pennants in 1948, 1950, 1951, and 1953 and to two Negro World Series titles.

O’Neil left the Monarchs in 1956 to become a scout for the Chicago Cubs. He was named Major League Baseball’s first Black coach by the Cubs in 1962 and is credited with signing Hall of Famers Ernie Banks and Lou Brock to their first professional contracts. He remained with the Cubs until 1988, capping a 33-year career with the organization. He returned to Kansas City the following year and joined the Kansas City Royals as a scout.

O’Neil rose to national fame with his compelling account of the Negro Leagues as part of Ken Burns’ 1994 PBS documentary “Baseball.” But what seemed like an overnight success story was actually built on a lifetime of athletic accomplishments. O’Neil took advantage of his national acclaim to promote his long-time dream of a permanent Negro Leagues museum to honor Black players, owners, and managers. His dream came true in 1997 when the 10,000-sqare foot Negro Leagues Baseball Museum opened at 18th and Vine.

At age 94, O’Neil became the oldest man to play professional baseball when he stepped up to bat twice during the independent Northern League All-Star game. Shortly thereafter, O’Neil succumbed to fatigue. He never regained his strength and died in Kansas City on October 6, 2006.

The National Baseball Hall of Fame and Museum honored him posthumously in 2008, creating the Buck O’Neil Lifetime Achievement Award. He was named to the Hall of Fame in 2022.