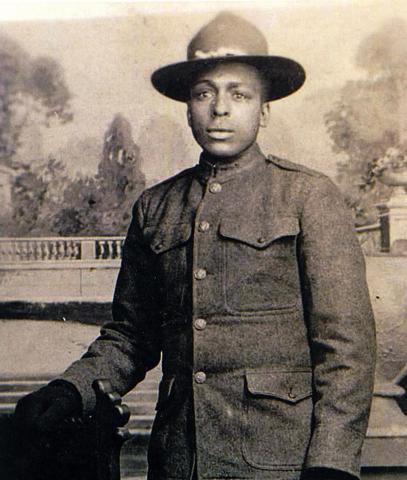 The brief yet distinguished life of Wayne Miner was defined by sacrifice and valor. The son of former slaves, Miner was born in 1890 in Henry County, Missouri.

He later moved to Appanoose County, Iowa, and was working as a coal miner in 1917 when called to serve in the World War I. He was part of the 92nd Division, an African American fighting force nicknamed the “Buffalo Soldiers,” when it deployed to France in August 1918.

During the Meuse-Argonne Offensive, the last major engagement of World War I, Miner volunteered to deliver ammunition to an outpost when no others would step forward.

Private Miner was killed in action on November 11, 1918, just a few hours before the signing of the armistice that ended the war. The following year, the American Legion Wayne Miner Post 149 was formed in honor of the fallen soldier.

The Wayne Miner Court housing development and Wayne Miner Health Center were also named for him. Miner is recognized as a hero and one of the last Americans to die in World War I. He is buried in St. Mihiel American Cemetery in Thiaucourt, France.