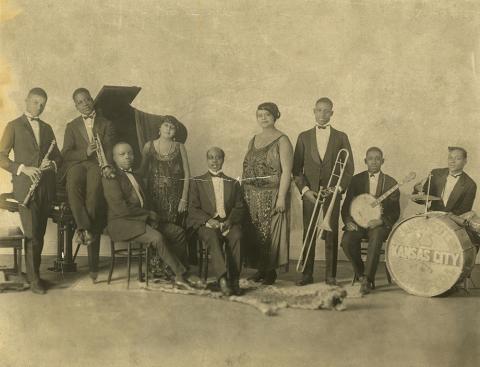 Benjamin “Bennie” Moten was an influential pianist and bandleader whose career was essential to the development of Kansas City-style jazz.

Moten grew up in Kansas City and took up the piano at an early age, learning his craft from two of Scott Joplin’s former students. He attended Lincoln High School but left before graduating to pursue a career in music and, in 1918, joined two fellow entertainers in forming the B.B.&D. Orchestra. He put together the Bennie Moten Orchestra four years later.

While not regarded as an exceptional piano player, Moten's reputation as a good-natured bandleader helped him attract the best musicians, including a young Count Basie. Their orchestra developed and refined Kansas City’s unique style of blues-driven and hard-swinging jazz, spreading the new sound through nearly 100 recordings produced for the Okey and Victor recording labels.

In addition to his ability to lead, Moten excelled at the business of music. He cultivated support from political boss Tom Pendergast and leveraged the relationship to make sure his band played the best gigs across the city, even at venues owned by white promoters.

In 1935, the band traveled to Denver, Colorado, to begin an engagement there. Moten remained behind to undergo a routine tonsillectomy. Tragically, the operation went awry, and he passed away at Wheatley-Provident Hospital. Moten is buried in Highland Cemetery in Kansas City.