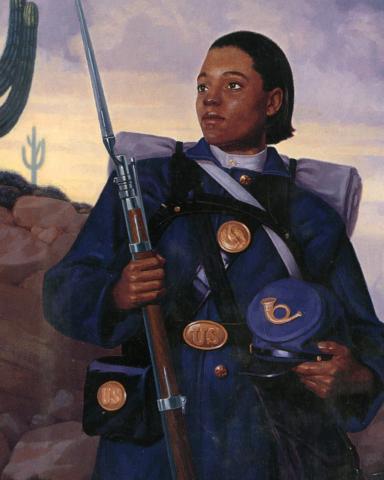 Cathay Williams was the first African American woman to enlist in the U.S. Army — in a time when women were prohibited from serving. She did it, remarkably, by posing as a man. Born into slavery in Independence, Missouri, Williams was relocated with her family to a farm outside Jefferson City while she was still a child and did domestic work there until the Civil War.

When Union forces took control of the capital city in 1861, area slaves were pressed into military service and Williams worked as an Army laundress and cook. She made her way after the war to St. Louis, had trouble finding employment, and in desperation disguised herself as a man and enlisted in the Army.

William Cathay, as she called herself, was assigned to the 38th Infantry Regiment, one of the African American divisions that became known as the Buffalo Soldiers. While never seeing combat, Williams served at Jefferson Barracks outside St. Louis and later at Fort Cummings and Fort Bayard in New Mexico Territory before being honorably discharged in 1868.
She applied for a soldier’s pension in 1892, but her application was denied and she died soon afterward.

A monument to her legacy as the only female Buffalo Soldier now stands in Leavenworth, Kansas.