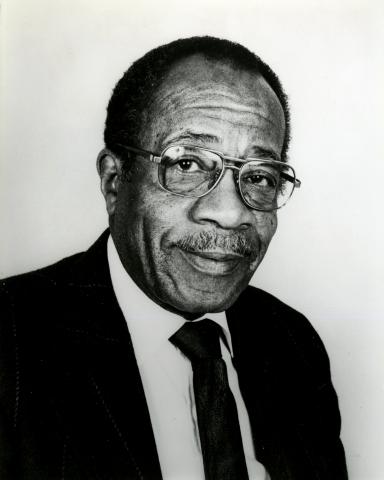 Fletcher Daniels led a distinguished life of public service as a postal worker, civil rights leader, school board member, and legislator. Born in Muskogee, Oklahoma, to Fletcher Daniels Sr., and Charity Humphrey Daniels, he was the grandson of a slave. Daniels graduated from Manual Training High School in Muskogee in 1937 and was a veteran of World War II, serving in the Army. After the war, in 1946, he and his bride Sybil moved to Kansas City.

Daniels began working for the U.S. Postal Service and made that his career until retirement in 1972. He served as president of Local 906 of the National Alliance of Postal and Federal Employees from 1950-60, later was elected as a regional president, and served on the national board.
Amid the struggle for civil rights in America, Daniels exhibited strong leadership skills. He met with Dr. Martin Luther King Jr. to develop strategies for impacting the lives of African Americans and marched with Dr. King in 1973 and 1975. As chairman of the board of the Kansas City Committee for Social Action in the 1960s, Daniels worked to open doors for Black people in downtown dining establishments and gain their access to other public accommodations. He served two years, from 1959-60, as vice-president of the Kansas City chapter of the NAACP and 15 years as a board member of the Kansas City Chapter of the Urban League.

As president and principal negotiator for the Kansas City Citizen Coordination Committee for the Kansas City School District, Daniels was instrumental in the building of three new schools in the urban core. He was elected to the school board in 1974 and facilitated the selection and hiring of the district’s first Black superintendent.

Daniels also served in the state House of Representatives and, in 1985, was recognized as one of the 10 outstanding state legislators in Missouri. More than a decade later, in 1996, he became the first African American to serve as speaker pro tem in the House of Representatives. The Fletcher Daniels State Office Building in Kansas City is named in his honor.