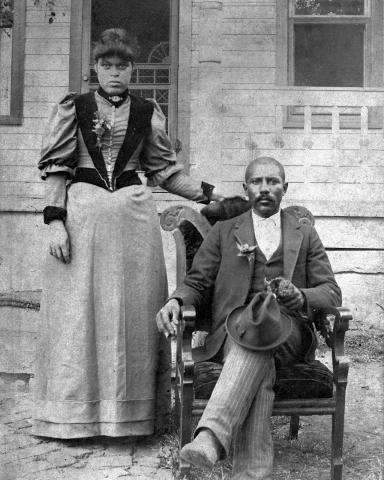 Farmer, landowner, and businessman Junius G. Groves was one of the wealthiest African Americans of the early 20th century. Born a slave in Green County, Kentucky, Groves was later liberated and joined other freedmen in the “Great Exodus” to Kansas in 1879, eventually finding work as a farmhand.

Impressed with his strong work ethic and production, Groves’ employer offered him nine acres of land to farm on shares. By 1884, he and his wife Matilda had saved enough to purchase 80 acres of land near Edwardsville, Kansas.

So successful was their venture that, just four years later, they had acquired a total of 2,000 acres and replaced their one-room shanty with a 22-room mansion. Groves made a name for himself as a potato grower, producing as many as 721,500 bushels in one year — far and away more than any other farmer — and earning the title of “Potato King of the World.”

He also operated a general store, maintained several orchards, and had investments in various mining and banking interests. Groves worked the farm until his death in 1925. He attributed his success to the endless hard work and devotion of his wife and 12 children.