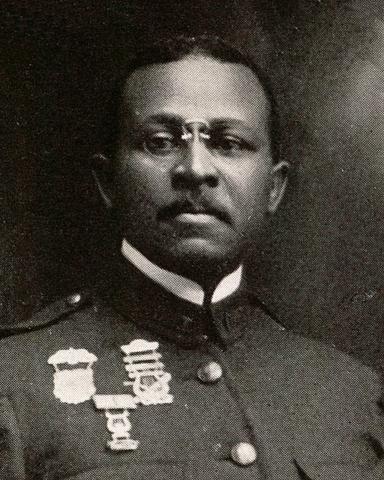 Maj. N. Clark Smith was a prominent musician, composer, and instructor and one of the most accomplished African American bandmasters of the early 20th century. Music and military discipline were instilled in the native Kansan at an early age. Born and raised in Leavenworth, he was greatly influenced by his father, a regimental trumpet player in the 24th Infantry. By the time he earned a degree in music arts from Chicago Musical College in 1905, Smith had organized and led numerous bands and garnered international acclaim as a bandmaster touring worldwide with a popular minstrel troupe.

After graduation, he served as music director at the Tuskegee Institute in Alabama and Western University in eastern Kansas and was bandmaster and military instructor at Lincoln High School in Kansas City, Missouri, from 1916 to 1922. Although a stern taskmaster, Smith had a gift for cultivating an appreciation for music and developing the musical talents of his students. Several first-generation Kansas City jazz musicians, including Bennie Moten, Julia Lee, and Harlan Leonard, studied under him.

As a composer, Smith drew inspiration from Black folk and spiritual music and was awarded a Wanamaker Prize in 1930 for his Negro Folk Suite composition. He continued to compose and teach music until his death in 1935.