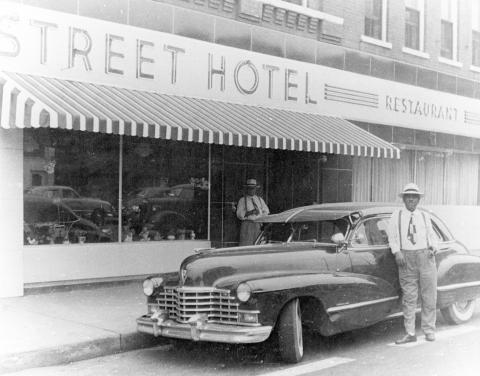 Reuben and Ella Street were prominent restaurateurs and hotel proprietors in Kansas City for nearly half a century.

Reuben was born in Nashville, Tennessee, but raised on a farm in the Armourdale district of Kansas City, Kansas. As a young man, he worked various hotel and restaurant jobs in Chicago and Indianapolis before marrying Ella Davidson in 1900. The couple relocated to Kansas City in 1903 and opened a small restaurant at 18th Street and Troost Avenue. Ella managed the business while Rueben worked as a railroad chef.

In 1918, the Streets opened a café at 24th and Vine. A short time later, they moved the business to a storefront at 18th and The Paseo and opened the Street Hotel in the same building. As their business grew, the Streets expanded operations to include a formal restaurant (the Rose Room), a cocktail lounge (the legendary Blue Room), a barber shop, and a pool hall. The Street Hotel became the premier hotel in the city catering to Black clientele and a popular destination for visiting celebrities and locals alike.

It was the entrepreneurial spirit of Reuben and Ella Street that transformed that original 18th Street café into a $100,000-a-year enterprise and one of Kansas City’s most iconic Black businesses.